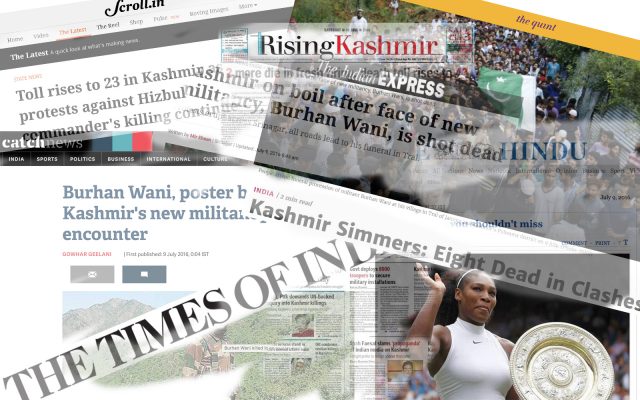 We are just over half-way through July and it has been a turbulent month, with several major news events occurring around the world. One news story in India is the continuing civil unrest and armed-forces intervention in Indian administered Kashmir. For the people of Kashmir, this has been a difficult time, with extensive curfew and mobile phone service curtailed. In all this, how much coverage has the Indian mainstream media given to the story, compared to other violent events around the world?

To answer the question using data, I relied on the number of tweets posted on Twitter by a publisher as a proxy for how much coverage the publisher gave to the topic. Each tweet on a topic could either represent a unique new article, or it could be a repetition, or a "replug" or "re-up", of a previously posted article. In either case, the total number of tweets on the topic should give some indication of the importance given to the topic.

In addition to the Kashmir story, I also looked at three other stories: the July 3rd bombing at a market in Baghdad, the July 14th truck attack in Nice and the July 15th attempted coup to overthrow the president in Turkey. For this analysis the start of the Kashmir story was taken as July 8th, when the news of the death of Hizbul Mujahideen leader Burhan Wani broke. The data was gathered as of approximately noon on Sunday, July 17th.

At first glance, looking at the total number of tweets on all these stories, it appears that the Kashmir story was the most important, since it garnered the most number of tweets by nearly all publishers, with the exception of Reuters India. It also tied for top story with the Nice story at First Post.

Beyond the Kashmir story, just over half the publishers gave the Nice story more prominence over Turkey. That was the case for 4 of the 7 dailies and 6 of the 7 online publishers. While the Baghdad story ranks last in the number of tweets, for several publishers tweets were not available going back that far in time. For IndianExpress and IndiaToday, especially, no data is available for the three days after the bombing. That said, looking at those publishers whose tweets are accessible to early July, the Baghdad story still got far less coverage than Nice. In terms of carnage and damage done, the Baghdad bombing caused four times as many deaths and more property damage. Additionally, there were other bombings in the days since. In this regard, the sensibilities of India's English language news publishers seem closely aligned with those of publishers in the US and Europe.

Now the picture looks quite different. Almost no publisher tweeted as much about Kashmir as they did about Nice or Turkey. The exceptions are thecaravanindia and Rising_Kashmir. The Baghdad story is still in last place with most publishers, except at TheHindu, scroll_in. thewire_in and ReutersIndia.

The Nice and Turkey stories received a lot of attention from publishers even though they overlapped in time quite closely. The Nice attack occurred less than 24 hours before reports started surfacing of the coup in Turkey.

Finally, the sheer number of tweets doesn't actually convey how important the story was during that period. That comes through when looking at the ratio of tweets on these stories to the total number of tweets during the same time. The next chart shows what percent of a publisher's tweets each story occupied during the initial three days of the story.

This shows that the Kashmir story was considered relatively minor during the initial days after it broke. Very few publishers considered it as important as they did the Nice or Turkey stories just after they broke. Aside from Rising_Kashir and thecaravanindia, some others who rated the Kashmir story highly were CatchNews, HuffPostIndia and the Indian wire services. To judge by the number of percent of tweets when the stories broke, TheHindu considered the Baghdad story more important.

The takeaway is that the media does cover Kashmir, but as the situation continues, the risk is that other global events will eclipse it, similar to the Nice and Turkey stories. For Kashmiris who want their story to be told, the best hope is a quiet Summer elsewhere in the world.

Please like NewsPie's page on Facebook so that you get all our articles and others may find us. 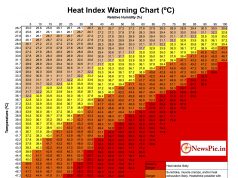 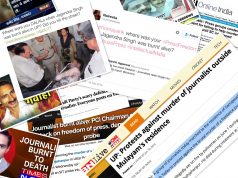 “Where were you when…?” Coverage of Jagendra Singh’s Death